There’s something about open water swimming that seems to attract eccentrics: usually harmless and quite likeable eccentrics, but definitely a little different to the type of characters you come across in daily life.
Take Cerizzi Paolo Eros for example, a friendly Italian family man, with a penchant for handcuffs and leg irons, at least as far as swimming is concerned.
On 23 September 2011, Cerizzi set a world record for the longest swim wearing handcuffs when he crossed the Straits of Messina – a distance of 3,162m.
His next challenge though is to attempt the famous Flowers Sea Swim in the Cayman Islands wearing both handcuffs and leg irons on 9 June 2012.
Taking on these sorts of challenges throws up unexpected obstacles. “The training to prepare for this kind of record is very hard,” says Cerizzi. “It’s forbidden to swim wearing iron handcuffs in a swimming pool and as I live far away from the sea, so it’s not easy to swim in open water.”
But that’s not all. “The European Union forbids the export of leg irons because they are considered objects of torture. So the Flowers Sea Swim staff is going to import the handcuffs and leg iron from the USA.”
Why does Cerizzi do this? “I’m a very competitive man,” he explains. “Everyone wants to be exceptional at least in a limited part of what they do, and I aim to be exceptional in extreme swimming.” 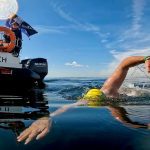