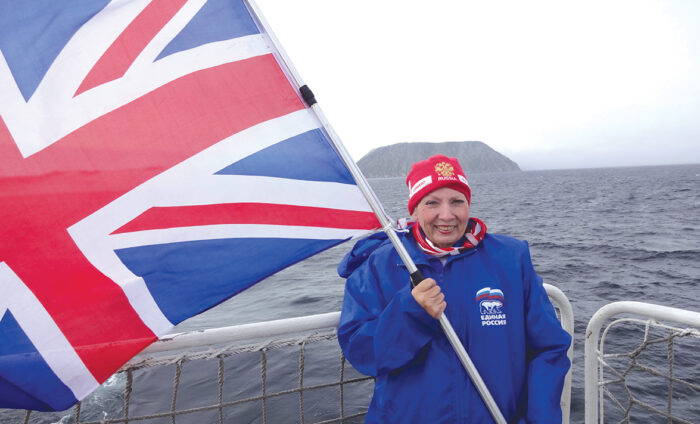 Jackie Cobell is tight lipped about her next challenge. “It is down south,” is all she will say, “and very, very, very cold.” She doesn’t want to give too much away in case it doesn’t happen. It is a rare moment of reticence from a woman whose remarkable swimming journey didn’t start until her 50th birthday, but which has subsequently seen her take part in historic swims around the world that swimmers half her age would be wary of undertaking. You could excuse Jackie if she decided that she had done enough extreme swimming and it was time to hang up her goggles. Instead, I get the feeling that her latest venture is going to be even more awe inspiring than the already amazing swims that make up her swimming CV.

Of those iconic swims, Jackie is perhaps most famous for her record breaking English Channel crossing. Pushed by tides, Jackie ended up swimming for 28 hours and 44 minutes. The slowest solo Channel swim on record, the swim is testament to her strength of will and determination to just keep swimming. “I didn’t look up at all. Didn’t ask any questions, it was just head down,” she says. “Luckily I can switch off. It is almost like an out of body experience. You can almost see yourself plodding along.”

It was a determination that was evident even when Jackie was a girl: her nickname was Flipper because she would stay in the water so long. As a child she loved swimming and loved being in the water. At school, before her first swimming lesson, her teacher told her: “You are going to make a marvellous swimmer with the size of your shoulders.” But then she started to put on weight. “I got quite chubby and I wouldn’t go swimming because I felt self-conscious,” she says.

Jackie’s weight issues and related self-consciousness persisted into her adult life. “I was coming up to my 50th birthday and I wanted to get fit because I was extremely overweight. I thought, ‘sod everyone else, I’m old enough to not worry about what people think.’ I had always thought about swimming the Channel but I thought it was just for athletes so when I found out that anybody could do it I thought ‘I’m going to have a bash at that.’”

Her decision to swim the Channel was treated as a bit of a joke by her friends and family. “My dad said I bet you £1000 you’ll never swim the channel – you are too old and too fat. I thought, I’ll show him, the old bugger.” Even at Dover fellow aspirant Channel swimmers weren’t always exactly encouraging. “I was a bit of a joke down Dover. I was always the last one out and the young guns would take the mickey out of me, saying ‘don’t get caught up in Jackie’s bow wave.’”

Of course Jackie had the last laugh when she did finally complete the crossing. “I did it and quite a few of these young guns didn’t do it.” And when she finished her dad was waiting by the dock with £1000.

Jackie trained for the Channel for five years. “Unfortunately I think I overtrained and because of bad swimming technique I had both my shoulders operated on, and that held things off for a year or so. And then I had a gastric bypass.”

Jackie’s weight and related health issues were so serious that her doctor recommended drastic action. “I had high blood pressure, diabetes and my eyes were going because of the diabetes.” The bypass operation took place in November 2009 and by the following July, when she swam the Channel, she had lost 10 stone.

“Even when I lost the weight I was still quite well covered.” Does she feel that helps with swimming in cold water? “Some people say that it doesn’t make any difference at all, but I am out on that one. In my experience of cold water swimming it does seem that people who are more padded are more tolerant to the cold. Being in the Channel that long, I was cold but I wasn’t hypothermic.”

Once she had completed the Channel, Jackie hit a low. “After the Channel it is a bit of an anti-climax. I kept going down to Dover throughout the winter, and then I looked into cold water swimming championships. I thought ‘oh yeah, I wouldn’t mind doing that’. It would give me another goal in life. I think to swim you have to have a goal, an end result.”

Her first cold water swimming championships were at Tooting Bec Lido and she enjoyed them so much that she entered the 450m endurance event at the International Winter Swimming Championships in Latvia. “I was really surprised to come first for my age group. That was a bit of a buzz so I started entering more and more cold water events.”

In Latvia she saw a poster advertising a relay across the Bering Strait, the politically sensitive stretch of water connecting the Pacific and Arctic oceans between Russia and the US. The relay was an audacious plan: a six-day 53-mile relay of international ice swimmers across one of the most dangerous stretches of water in the world, all in temperatures under 5 degrees Celsius.

The swim was supposed to take place in 2012 but was aborted because of conflict between the US and Russia. “The captain had a wire saying that if we crossed into US waters the boat would be confiscated and we would all get arrested.” But the next year the swim went ahead with a Russian military ship as support boat and a team of 66 swimmers from 16 countries.

“The Bering Strait swim is up there with having a baby and getting married: it was just absolutely amazing. Something about the excitement and actually the danger. The seas were rough, full of killer whales and walruses.

“Near the Russian borders the water temperature was 2 degrees. Although we only spent 10 minutes in the water we were on the ribs for up to an hour in the wind, so you would be freezing cold and wet before you entered the water. It was probably one of the hardest things I have ever done.”

The Bering Strait was the first of Jackie’s swims for peace. “It was amazing as there were swimmers of every nationality on that boat and there was no animosity. We all got on well, full of camaraderie. It is amazing how swimming unites ordinary people. It is just the ruling elite that creates all these troublesome conflicts.”

Since then Jackie’s swims have had a political motive, although she says that she doesn’t make a big thing about swimming for political reasons. Her next major freedom swim was in March 2015 in the Falklands Islands with Matías Ola, an Argentinian swimmer she met on the Bering Strait relay. Under the banner of Unir el Mundo (Unite the World), the Falklands swim was a 4.5km crossing across the Estrecho de San Carlos between Gran Malvina and Soledad.

“There was something about the Falklands swim. I took great pride in doing it. I don’t think a lot happened because of it, although there was a lot of discussion in Argentina and I was on all the news channels. But not a lot of coverage in this country, and in fact I got a lot of abuse.

“The Falkand islanders were very nice to me and Matias but there was an undercurrent of racial hatred towards the Argentinians. But it was mostly the older generation who were there during the 1982 conflict. I heard stories about how some of them were rounded up and put in a hall at rifle point.”

The swim itself was logistically difficult to arrange. “We didn’t know anything about the islands whatsoever and we thought that everyone would have ribs or boats, but we came up against a brick wall. It seemed like people were unwilling to help us in case they were bullied afterwards.”

Jackie and Matías completed the swim in 2 hours 37 minutes. During the swim they saw penguins and dolphins, while fighter jets flew overhead. But for Jackie the most important thing was the symbolism of the swim. “It was a historic and iconic swim, knowing great battles had taken place and men had been lost in that water.” It is an interesting idea, that water – like landscape – has a history. “It is the same with the Channel. I don’t think a lot of people realise the significance of swimming in that Channel where so many men have died and battles have taken place overhead. It makes a lot of difference knowing water is very historic.”

Jackie’s next freedom swim was from Robben Island, where Nelson Mandela was incarcerated. It is a swim that she says has a real wow factor: “What a fantastic backdrop that was – breathe to the right, Table Mountain. There were seals, dolphins, humpback whales – which unfortunately I didn’t see! But if you can see some of the marine life it makes it so exciting.”

The swim was in 10.5 degree water and Jackie was one of only five female skins swimmers. “I am glad to say I was last again! It took me 3 hrs 57 mins, and I trained quite hard for that. You need a goal when you are doing these swims.”

Jackie’s goal now is to keep doing more and more iconic swims. I ask her whether she feels as if her Channel swim has given her a second lease of life. “Since I have done the Channel I am so humbled and so lucky with what has happened to me afterwards. It is amazing. It is great for the older woman knowing that you can do more than what these youngsters can do. There are so many fantastic swims out there that I just want to explore.” 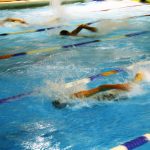 How do I stop myself swimming too fast?