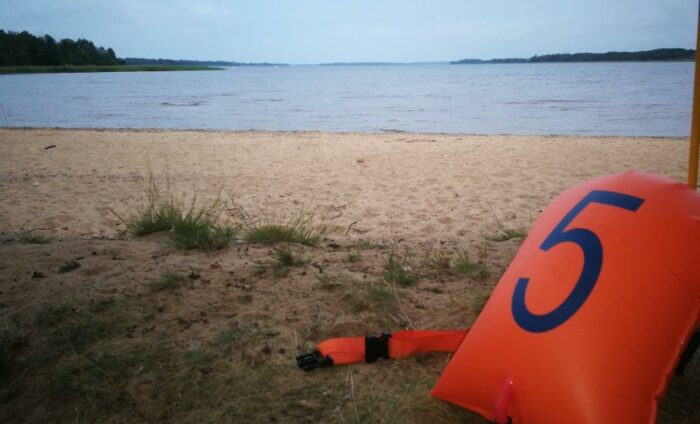 Billed as Sweden’s longest and toughest open water race, Vidösternsimmet is a 21km (plus a bit) end-to-end swim of a lovely lake in the southern central part of the country. There’ll be a full event report soon in Outdoor Swimmer magazine. Meanwhile, here are some reflections on my own race, and a few things I learnt.

While by the standards of Channel swimmers and some of the amazing athletes we occasionally feature in Outdoor Swimmer 21km is little more than a warm-up, it is the longest distance I have ever attempted by a significant margin. And, for the record, I wore a wetsuit (thank you Yonda for the loan).

With any long distance swim, my first objective and primary measure of success is completion. It’s rare for a long swim to go smoothly from beginning to end and to totally avoid negative thinking. And I certainly had moments – actually a lengthy spell of them – when I seriously wanted to give up on this swim. My biggest achievement on it was therefore that I didn’t stop!

My training had gone well. Since 1 Jan this year, I have swum around 600km and managed all of that without breaks for illness and injury (and I’ve recorded my training sessions here). That consistency paid off and I’ve been racing strongly in events leading up to Vidöstern. The training was mostly pool based and I did 13 races of between 1.5km and 11.5km for open water practice. I felt fit and ready.

Still, there was one aspect of preparation that with hindsight I didn’t pay enough attention to, and that is nutrition. The first problem I encountered was the pre-race breakfast. Before a swim I usually eat a bowl of oats with a handful of raisins. I should have brought some with me. While the hotel where I stayed offered a perfectly good breakfast from 4:30 in the morning, it wasn’t what I normally have and I struggled to eat enough. I was therefore already starting to feel hungry by the time I arrived at the start.

The swim started well. There was a bit of chop and a headwind, but nothing too challenging. I settled into a comfortable rhythm. The race leaders had gone off quicker than me but I could see them a short distance ahead and was keeping pace with them without feeling too stretched. However, I was getting increasingly hungry.

I reached the first feed station – a raft on the water – in a little under an hour, grabbed a gel and some water, and continued on my way. I felt energised and caught up with a couple of swimmers ahead but was soon fantasising about food. Worryingly, my wrists were also starting to hurt. This was something I’d experienced before but never after such a short distance. My working diagnosis is that it’s a repetitive strain issue that causes tendonitis. Why it happened just a few kilometres into this swim, I’ve no idea. I tried to ensure my arms stayed relaxed on the recovery and kept focused on good technique.

I was now swimming with a group of three others, sometimes drafting, sometimes leading, and feeling good except for the hunger pangs and niggling pain in my wrists. We reached the second station, which was on land, in around 2 hours but by now I was seriously in need of food and a little dizzy when I stood up.

This was the point when I compounded the nutrition error I’d made starting with breakfast. Vidösternsimmet offers I wide range of food from energy gels and drinks to chocolate, cinnamon buns and pickled cucumber – and I dived into the chocolate. I’ve often eaten chocolate on long swims without any problems, but those were more leisure swims than races, and I also didn’t mix it with energy gels and cola (which I don’t like anyway so why I drink it on swims remains a mystery), nor have I eaten so much so quickly!

Initially, this mixture satisfied my immediate craving for food. I started the next section feeling good, and confident that I’d soon catch up the other swimmers I’d been with, who’d barely paused to eat and were now a short way ahead. But that plan quickly unravelled as I started to feel sick! The 5.5km to the next feed station were some of the most arduous that I’ve ever swum – and it was nothing to do with the heavy rain that was falling at this time. I couldn’t maintain any rhythm and soon fell back a couple of places. And of course, once one thing goes wrong, you start noticing other issues, like the worsening pain in my wrists. Still, I focused on keeping moving, and counting off the marker buoys.

I don’t think I looked too good by the time I reached the next feed station. One of the volunteers urged me to try the pickled cucumber, which I’d so far avoided. She said it’s very good if you’re feeling exhausted. I’d gone off sweet things by this time anyway and somewhere at the back of my mind was the thought that pickles were good against cramp (no idea if this is true or not) so I took a couple.

This was probably my lowest point. I was only just past half way and feeling horrible. But then, wading back into the water, I noticed that I was at a particularly pretty section of the lake and, despite the sickness misery, felt lucky to be there and able to swim. And soon after that, I started to feel better. Whether it was the pickled cucumber or if my stomach had finally digested the chocolate, I can’t say. I no longer felt sick and the pain in my wrists, while still there, didn’t seem to be getting worse. I was able to pick up my pace again, but not enough to catch any of the swimmers in front, and I settled into a groove that took me through to the finish line. I was in ninth place in 6:14:08. Not bad, I think, for a first attempt but definitely room for improvement. The winner did 5:43:24.

Funnily enough, I didn’t fancy any of the sweets or chocolate on offer at the finish line but 15 minutes later, after a soak in the hot tub and getting changed, I was happily eating my free post-race meal. My wrists took a little longer to recover but are fine now.

This is definitely a swim I’d like to try again. It would be good to break 6 hours. For next time I will:

What to eat before your morning swim

Total Immersion: what is neural training and why do we do it?