The team at Swim Smooth put a lot of emphasis on ‘open water skills’ and suggest that swimmers who are looking for improved competitive performances should spend a significant portion of their training time on skills development. In fact, in their new ‘Swim Smooth‘ book they suggest open water skills forms one of three keys to better performance, alongside ‘Stroke Technique Development’ and basic ‘Swim Training’.
At H2Open we’ve long been fans or Swim Smooth and Paul Newsome is a regular contributor to our pages, but personally I’ve always viewed open water skills as the icing on the cake rather than a main ingredient.
However, recently I saw a very clear demonstration of someone who would probably have finished a race much quicker by nailing just one open water skill: sighting.
During a swim I noticed another swimmer repeatedly overtake me. In a matter of a few strokes he’d go from swimming by my feet to being a body-length in front. He’d then fall back to level with my feet before flying past me again. I realised that every eight to ten strokes he was literally stopping, lifting his head to look around and putting in half a stroke of breaststroke. I would imagine someone with that amount of raw speed should be able to swim a mile at least a couple of minutes faster than me, and probably would do in a pool, but in fact he finished just a few seconds ahead.

If you watch a top open water swimmer sighting is incorporated smoothly into the stroke and hardly seems to impact on speed at all (see Keri-Anne Payne in the picture above). It’s therefore definitely a skill that can be improved. It comprises both a technical component (i.e. timing and lifting the eyes just enough to see without dropping the legs) and a mental one, which includes the confidence in your ability to fix a direction with just the briefest of glances that rarely gives you a complete picture and developing a sense of where you are from what you see to the side as you breathe.
Other open water skills include managing anxiety, swimming straight, drafting, swimming close to others and turning. You may already be aware of weaknesses in one or more of these areas but if not ask a friend to watch next time you race and to let you know afterwards if you meander between buoys or lose ground going around them. Try to get a sense of how you compare with the best swimmers so you can decide where to spend your time for maximum benefit.
In judo you can defeat a stronger and heavier opponent through superior technique. Likewise, in open water swimming you can beat faster and fitter swimmers by mastering a few skills (as long as they haven’t, obviously). Don’t forget you need to keep working on fitness and technique at the same time though.

Quantifying the benefits of fat for open water swimmers 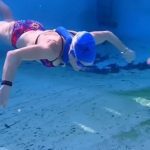