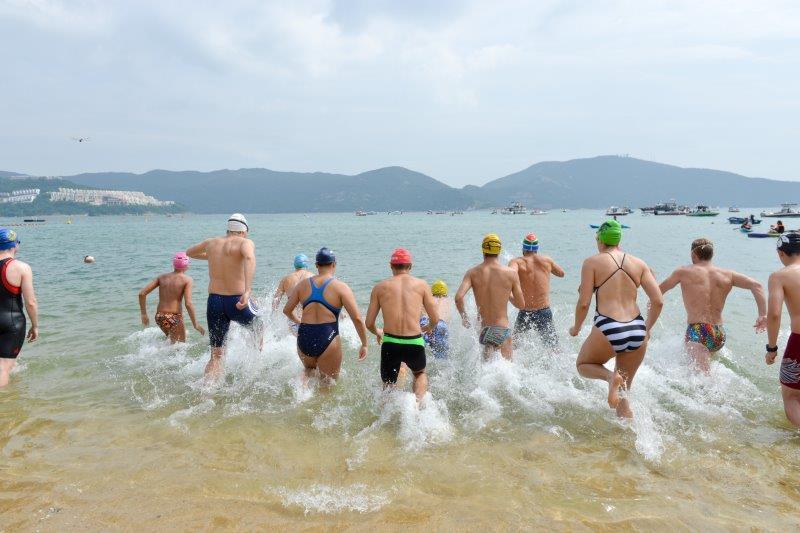 While Tropical Storm Aere threatened to disrupt this year’s 15km Clean Half open water swim in Hong Kong, conditions on the 8 October turned out to be some of the best ever in the event’s history as the storm steered clear.

Now in its 10th year, the Clean Half attracts swimmers from as far away as Spain, Argentina and Australia. Twelve solo swimmers, 56 five-person teams and six two-person teams took up the challenge in 2016.

The relay format is interesting as it differs from rules used in many long distance swims in that the swimmers rotate after 20 minutes each for their first swim and then at 10-minute intervals thereafter (English Channel swims typically rotate swimmers ever hour, for example).

The two-person ‘Yak’ format is also unique. Each swimmer takes turns either paddling the kayak or swimming, rotating every 30 minutes.

In the solo swim, Jose Luis Larrosa from Spain led from the start to finish in one of the fastest times ever of 3:30:32. He was followed home five minutes later by Scott Miers while 14-year old Bill Thorley finished third. First female finisher was Mary Kwoh in 4:26:59.

The fastest relay team (The HKFC McBean’s Bombers) blasted around the course in 3:13:41 and the quickest Yak partnership of Sheryl Slater and Andrew Russell finished in 3:53:09.

All swimmers enjoyed a water temperature of 27 degrees.

As for the name, race director Doug Woodring explains:

“We call it the ‘Clean Half’ because it is the “clean” half of Hong Kong Island. During this time of year, with the winds from the north east, the waters are excellent, perfect temperature (unless you like cold), and very clean. Thus the descriptive title, as it is still not possible to swim through the ‘other half’ of the harbour.”

The date for next year’s Clean Half has already been scheduled for 7 Oct 2017. There’s no specific entry requirement for solo swimmers but entrants are required to submit evidence of previous 10k swims with times and there’s a cut off of six hours. Every team or solo swimmer has to have a boat with them, whether a kayak or a speedboat.

In terms of navigation, Woodring explains that: “often the swimmers know the line to take, so the support craft follows, but for overseas swimmers who might not know the course, the kayaker or speed boat helps to show them the line.”

“This is not the time to ‘have a go’ at open water swimming.” The outdoor swimming community responds to the government’s new guidance