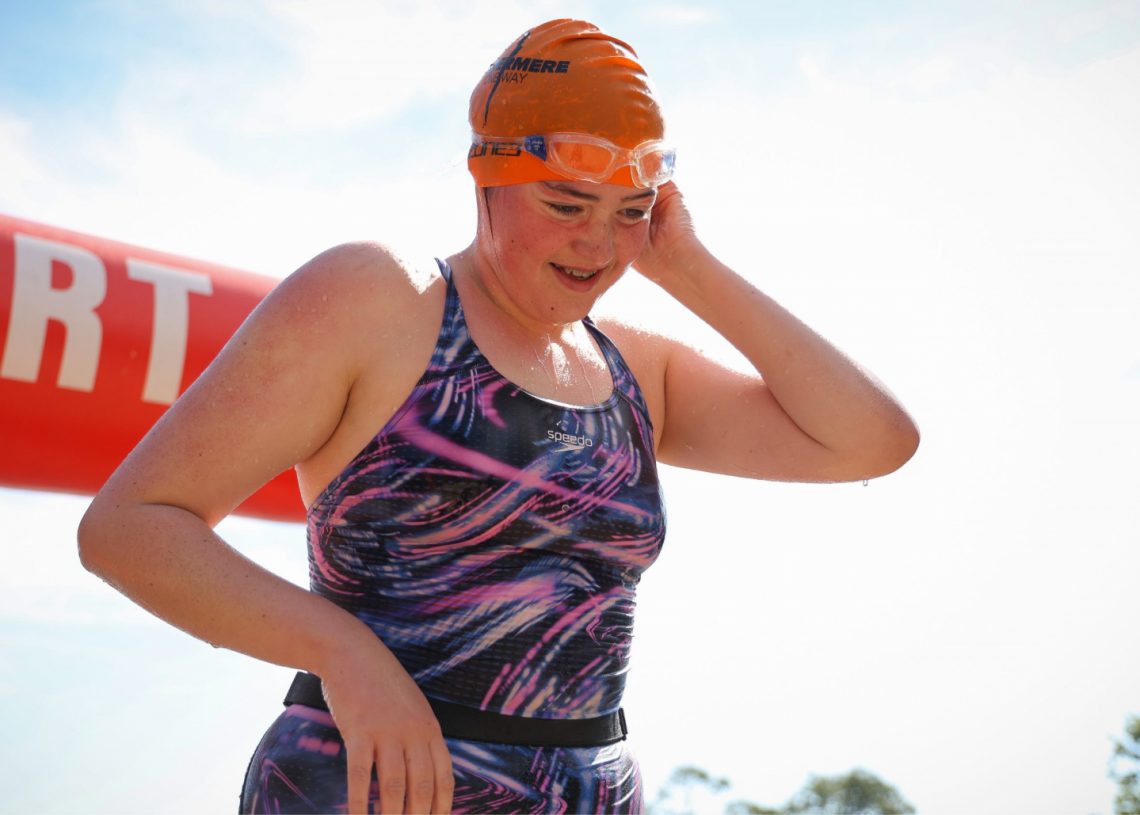 We speak with Gabrielle Furlong, the youngest person to complete this year’s Lake Windermere swim, about swimming for her mental health, her grandad’s invaluable support and ambitions to swim the Channel in 2023.

The 16-year-old from Co Dublin completed the 18km one-way swim in eight hours and 17 minutes.

“I couldn’t have asked for better weather and conditions,” Gabrielle told us. “The water was 25 degrees, and the air was up in the 30s. As the swim commenced, the sun rose over the hills surrounding Windermere, making the water look like glass. It was beautiful.”

The young swimmer got into such a rhythm, that at times she described going into a daze. “At one point, I was so deep in my thoughts that I forgot I was swimming! I was in such a rhythm, I zoned out and felt my head hit the back of the kayak. After that I made sure I stayed alert.”

Gabrielle’s grandad Peter Walsh (69), supported her throughout in a kayak and was there for her during a particularly challenging part of the swim.

“Around the 7k mark, my shoulder gave out,” she told us. “I wanted to get out of the water. I told my grandad, and he said to keep going until the 10k feed. So I did. When I got to the food stop, I stood up at the shore and went to take my goggles off. I saw my family on the shore rooting for me and cheering me on. I think this is what I needed to keep going. So I decided to get back in the water and continue for the next 8k.”

Gabrielle describes having her grandad as her kayak support was ‘the best decision’. “We became a lot closer,” she said. “Having him beside me meant he was able to experience everything with me. Even though it’s the swimmer who gets the medal at the end, it’s not possible without the support; it’s a team effort. So at the end of the swim, I decided to ask for a medal for my grandad, as I think he’s more amazing then any swimmer there that day.”

A catalyst to begin outdoor swimming

The young swimmer only started outdoor swimming in earnest in 2020, to improve her mental health during lockdown. Growing up in landlocked Carlow, Ireland, Gabrielle and her sisters would spend summers on her grandad’s boat on the River Shannon; she always loved the water.

After moving to Dublin in 2014, Gabrielle took up swimming classes. Her coach, Claire O’Dwyer, said to her at age seven that she could swim the Channel one day. But after moving to Glenalbyn Swimming Club, she never felt like she was fast enough and it eroded her confidence. Eventually, in her second year of secondary school, Gabrielle dropped swimming altogether.

Years later, another challenge would prove to be the catalyst that re-started her swimming journey. “As COVID came around, my mental health deteriorated and I had nothing to escape to – no hobby or sport. I then realised people were taking to the sea. I rang my old coach, Claire and asked her what I could do. She brought me to the beach on a random Wednesday night and swam to a marker with me. At the time, I couldn’t keep up, but I never gave up. I kept working hard and decided I wanted to swim the English Channel. This seemed so far away and that it would never actually happen. I swam Windermere as a stepping stone to the Channel.”

Gabrielle trained everyday for the event in the River Shannon, where her grandad has a boat. She did her first 10k swim only two weeks before Windermere; before that the longest distance she had completed was 4k. “As you can imagine, I had a lot of people doubting me.”

Gabrielle plans to swim the English Channel, and has just booked her spot for 2023. She swims in the sea, river and lake, taking two days off a week. “Because I am still in school, I find it difficult to manage them both but it’s something I have to do because I love swimming.”