In the United States, 56 per cent of people have had an affair, and 71 per cent would cheat if they could. And I am now one of them. Last week, I cheated on swimming.
Swimming is my favourite sport. I love getting a different perspective on the world, and I feel at home in the water. But swimming can’t give me everything. It’s not a very social sport, I can’t swim outside year round, and I always need to abide by someone else’s schedule (the local pool or the sun). So sometimes in the fall when the leaves are changing colour and the air feels crisp, I find an eagerness brewing. No matter how hard I try to stay faithful, I just can’t do it. I pass over my swimsuit and reach for my trainers. I go for a run.
It was during one of these dalliances that I registered for the Bristol + Bath Marathon (BBM) on 25 October. After finishing the Paris Marathon in April 2013 and hardly being able to walk the following week, I vowed never to do one again. But as is so common with affairs, I was eventually tempted back.
During three years studying at the University of Bristol, I always wanted to do the Bristol Half but it was never on a good weekend. I also wanted to run to Bath but I could never navigate British geography. So when the BBM route was announced to combine both, I registered.
I did minimal training for Paris but I vowed that BBM would be different. It was.
I started well. In June and July, I did seven weeks of run training. But then the lake warmed up, the sky turned blue, and my swimsuit started calling. I realised that I could not maintain a committed relationship with both swimming and running. So I abandoned my affair to commit to my true love.
I had a great swimming summer. I trained hard and finished races that I had previously thought impossible. But that came at a price. I neglected running completely, not setting foot in my trainers for two months.
So as the Bristol + Bath Marathon approached, I realised that this marathon was indeed different. Where I’d done minimal training for Paris, I did no training for Bristol. I knew I would pay.
In the two weeks leading up to the Bristol + Bath Marathon, I did four 5 kilometre runs. They hurt. I was in good cardio shape from swimming but I hadn’t exercised my running muscles in months. Each run ended with sore legs and raw feet.
Realising that I was in no shape to run BBM, I figured I had three options:

I arrived at Queen Square on the cold but sunny morning of 25 October prepared to run/walk the route. I predicted finishing near the cut off.
You cannot believe my surprise when the race went well! Ten kilometres turned into 21.1 and I maintained a consistent pace. I felt good and I was on pace to beat my Paris time.
Of course races rarely go well for their duration. The second half brought hills and cramps in my running partner, causing us to slow slightly. But we still finished the race well under our estimated time and I recovered significantly faster than I had in Paris. I was shocked.
How was it possible that I had run a marathon with no run training?
That’s when I realised – swimming and running are not separate entities that I must choose between. I can care deeply for them both because no matter which sport I do, I am an endurance athlete. The physical and mental training that allowed me to swim 13 kilometres also allowed me to run 42.2.
I am not recommending that you run a marathon without proper training. But I am saying that when I put on my trainers this fall, I won’t be cheating on swimming. I’ll be an athlete in one of its many forms.
But don’t worry. Swimming is still my favourite. 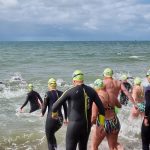